-------------------------
International Paleontology Illustration Competition (IPIC 2011) & Exhibit
The first edition of IPIC'2011 exhibits open to the public on 23th October and ended a few days later, on 28th.
It was a brief, but much praised exhibit.
In fact, it was one of the climax events that happens in the XXII Brazilian Congress of Palaeontology (held in Praiamar Natal Hotel & Convention) and was consider a huge success for all the hundreds of Congress attendees, as also by the public in general.

We (IPIC organizatin) were greatly honored to receive all the pieces submitted to IPIC and every one of these artworks are superb examples of contemporary paleoillustrations. Thank you everyone for sharing your wonderful art with us.

Due to the high quality of almost all artworks submitted to IPIC'2011, it was a truly hard task - for all the 5 jurors - to decide and choose the IPIC'2011 winners.

Following Jury decision, I am delighted to announce the IPIC'2011 Awards Winners - CONGRATULATIONS!!! 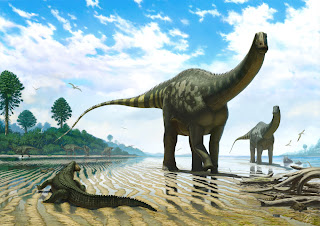