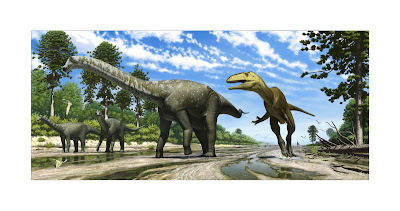 Phew! I've finished it. Hovever now I don't like the result. The scene is not interesting, not a very good composition and balanced. Animals are not very convincing and alive.

I wanted to draw tapuiasaurs with some large theropod. Together with the skeleton of Tapuiasaurus was found articulated skeleton of abelisauroid (Zaher et al, 2011). But it's not published yet. It's not desirable to draw generic abelisaur when the articulated skeleton is preserved. Also not known whether or not it's big. So I decided to depict the generic carcharodontosaurid. The findings of carcharodontosaurids appear in South America and Brazil in the early Cretaceous period (Aptian). So it could be that some carcharodontosaurid lived in this time and place. Actually I'm not very fond of making such assumptions without any factual findings, but this is an exception.