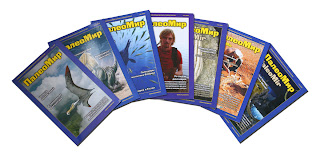 Journal "PaleoMir” (PaleoWorld in English) is the first popular science magazine in Russia on paleontology. Published twice a year - spring and fall.
In each issue we publish materials about the extinct animals, searching for fossils, expeditions and excavations, and paleontologists, news and new findings. It’s mainly focuses on the fossils found in Russia.
It’s about 100 pages in issue and NatGeo magazine format. The magazine is created with specially created illustrations, photographs and articles.
The main materials for the magazine are written by leading local specialists - staff of the Paleontological Institute of RAS, Institute of Geological Sciences, State Geological Museum. VI Vernadsky, as well as regional research centers: Komi Science, Saratov State University. NG Chernyshevsky, Irkutsk State University, etc.
Also in the pages of PaleoMir you can read stories written by Russian ethnographers and collectors about the discoveries and locations, tips on how to properly search, dissect and store paleontological specimens.
Among the regular sections of the magazine there are a humorous column "Paleontologists joke", which publishes the funny and amusing stories related to the fossils, and the heading "Paleomiry" (Paleoworlds) which tells about the work of paleoartists and animalists. There was interview with Doug Henderson, John Sibbick, Alain Beneteau, Julius Csotonyi.
The fact is we do not have the popularization of paleontology in Russia. Despite on that dinosaurs and other extinct animals attract the attention of many people in our country. There are only scientific publications or silly books with illustrations which are translated from English mainly. Of course we can watch on the TV different NG and BBC films, sometimes we can see good foreign books. But we do not have own books or TV films. Latest interesting Russian popular book about fossils published ten years ago, which number was about 50 copies. Approximately before it - 300 copies. No comments.
Sadly, our paleontologists cannot and do not like writing for ordinary readers. We cannot go to the bookshop and buy (even more - to choose from several), a good book about extinct animals. You can only find the old books in second-hand (antique) shops or download any pdf file. The situation is very sad. Against this background “Paleomir” fated to be an unique edition. But it is the project of amateur hobby. Therefore it publishes from chance to chance, the content is mainly determined by preferences of an editor (until recently it was a Permian, now I think after changing the editor - Jurassic).
“Paleomir” was invented occasionally. Young historian Dmitry Nuzhnenko took a great interest in fossils. He published a magazine on archaeology and decided to make a journal on paleontology. Just because this niche was unused, more precisely - was empty, and Nuzhnenko wanted to fill it. The first number in 2006 he wrote almost entirely by himself. Scientists gave some old their articles and they are not going to write anything new. Plans for the magazine were enormous - no wonder that the first number published in two languages: English and Russian. It was refusing later. “Paleomir” is the only popular edition in Russian on paleontology. Now it changed the editor and the magazine plans to make more scientific and increase the number of issues, before it published twice a year. But what will come out - it's hard to say.
Paleomir №9 in press now. You can download free pdf archival versions of this journal from the official site. If you can read in Russian, I am sure you will enjoy.
Website: Paleomir
To download pdfs http://paleomir.ru/journals.htm
Автор: Andrey Atuchin на 00:24